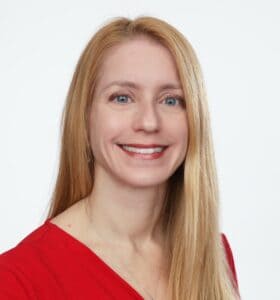 Karen Benjamin Guzzo, PhD, has been named the new director of the Carolina Population Center at the University of North Carolina at Chapel Hill. Most recently Guzzo served as professor of sociology at Bowling Green State University, where she was also the Director of the Center for Family and Demographic Research.

“Dr. Guzzo has uniquely deep knowledge of population science and strong connections across the field,” says Interim Vice Chancellor for Research Penny Gordon-Larsen “I am excited to welcome her into this role as she guides CPC’s next phase of growth as well as the center’s continued leadership in interdisciplinary population science.”

In many ways, this is a homecoming for Guzzo – she received her PhD from UNC’s Sociology Department and was formerly a Trainee at CPC where she worked with Ron Rindfuss on projects related to fertility.

As director of the center, she’ll lead a remarkable group of faculty fellows from across the university who address pressing research questions about population dynamics, fertility, health, mortality, migration, and the environment. CPC researchers have pioneered data collection and research techniques, many of which have been adopted by other scholars and practitioners around the globe. Interdisciplinary training programs based at CPC integrate approaches from the social and biological sciences, building research capacity and training the next generation of scholars.  As director, Guzzo will oversee these initiatives. She will also serve as a professor of sociology in the College of Arts and Sciences’ Sociology Department.

“What is great about the Carolina Population Center is that there are all of these different interdisciplinary connections,” says Guzzo. “I’m very excited about interacting with scholars from a range of disciplinary backgrounds, research interests, and geographic areas.”

Guzzo received her BA in Sociology and Economics from Johns Hopkins University, before coming to UNC for her PhD. She is a family demographer and quantitative sociologist with a primary focus on American fertility and family behaviors. Her current work includes studying U.S. fertility plans and behaviors during the pandemic, measuring retrospective fertility information in U.S. surveys (using the Add Health dataset), and looking at American teens’ and young adults’ attitudes towards family behavior. Her work has been funded by the National Institutes of Health, the National Science Foundation, and the Department of Health and Human Services.

What do you remember about your time at CPC?

When I got to CPC as a student, I had the luck of getting to work with Ron Rindfuss who took the time and invested in me. One of the things that was great about working with him is that he was connected to everybody else. Through Ron, I got to know Philip Morgan, who was at Duke at the time, and then David Guilkey. And what was also so great about Ron and about the center was, and is, all the interdisciplinary connections and the wide range of places fellows study. That is very appealing, and I’m excited about getting to come back and be part of such a place.

You mention the interdisciplinary parts of CPC.

Well, as a sociologist, my work has generally approached issues with that disciplinary lens.  But one of the nice things about the modern age, with social media, open access repositories, and amazing search engines, is that you can see just how many people are working on similar projects from different angles from different disciplines – and how much overlap there is. I love finding out who is doing similar work in economics, public health, policy, geography, and the like. I’ve really learned a lot in particular about some of the public health aspects of studying unintended fertility – what we are really measuring, is that a loaded term? How is it interpreted by people’s lived experiences? I’ve really learned to listen to other disciplines as they talk about their research and how to incorporate that into my own work.

Let’s talk about your work for a minute. You study people’s decisions about having children…

I’m interested in why people have children or not and how that relates to current fertility trends. If fertility rates are down because people do not want to have children, that’s fine. But if people say they want to have children and aren’t having them, it’s important to ask, what are the obstacles to people following through with that path? I think when people want but aren’t having children, it’s because they don’t feel confident about their own futures or the ability to give their own potential children good futures. And, of course, what underlies modern childbearing behaviors and family formation is the ability and autonomy to control whether, when, and under what circumstances to have children. What seem like basic rights to many people now feel threatened in the U.S. and abroad, and we know the effect of recent changes will not be evenly felt. A lot of work will need to be done to understand the impacts at both the individual and societal levels of the massive shifts around reproductive health care and family planning.

A lot of the data that CPC houses is longitudinal data, meaning we follow a cohort of people over a set of years and track data over time.

It would be amazing if we could do a repeat of AddHealth. I know it’s such a big project, and we continue to follow the current cohort as they age. But it would be so informative to follow a younger cohort so we can compare across different generations.

What else are you excited about?

It is really special that CPC has such a large number of population scientists in one place. I love being able to geek out with people who also geek out over the same things that I do. But I also enjoy being able to have conversations with people who are interested in the same things that I am — but are approaching their research in a very different way.

I am looking forward to the Friday speaker series — such a broad set of topics are covered and that’s really exciting – all of the research that we learn about.

And I’m very excited about the new Triangle Research Data Center.  It’s democratizing access to research and to data.