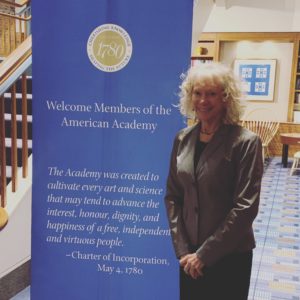 Kathleen Mullan Harris, a Faculty Fellow at the Carolina Population Center and the James E. Haar Distinguished Professor of Sociology, was inducted into the American Academy of Arts and Sciences on Oct. 12 in Cambridge, Massachusetts, as part of the new class of more than 200 members. The honor recognizes the outstanding achievements of individuals in academia, the arts, business, government, and public affairs.

Harris studies social inequality and health seeking to understand how disadvantaged environments and social experiences influence physical well-being across the life course. Her research focuses on the biosocial processes that increase health risks early in life before disease is manifest to inform policies that reduce health disparities and improve population health.

“One of the reasons to honor extraordinary achievement is because the pursuit of excellence is so often accompanied by disappointment and self-doubt,” said David W. Oxtoby, president of the American Academy of Arts and Sciences. “We are pleased to recognize the excellence of our new members, celebrate their compelling accomplishments, and invite them to join the Academy and contribute to its work.”

The Academy was founded in 1780 by John Adams, John Hancock and others who believed the new republic should honor exceptionally accomplished individuals and engage them in advancing the public good. The Academy’s dual mission remains essentially the same 239 years later with honorees from increasingly diverse fields and with the work focused on the arts, democracy, education, global affairs, and science.

“With the election of these members, the Academy upholds the ideals of research and scholarship, creativity and imagination, intellectual exchange and civil discourse, and the relentless pursuit of knowledge in all its forms,” said Oxtoby.

“While the work of this class includes areas never imagined in 1780 – such as cultural studies, cybersecurity, disease ecology, nanotechnology, paleoclimatology, and superconductivity – the members of the class of 2019 embody the founders’ vision of cultivating knowledge that advances, in their words, a ‘free, virtuous, and independent people,’” said Nancy C. Andrews, chair of the Board of Directors of the American Academy.

Portions of this piece were originally published on The Well.