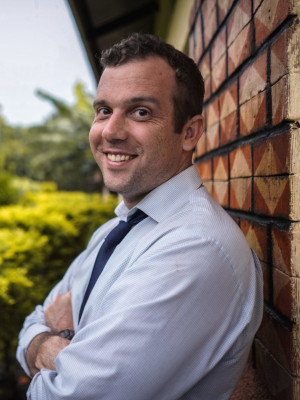 Dr. Boyce’s clinical interests include the diagnosis and management of vector-borne diseases with a particular focus on tick-borne diseases endemic to central North Carolina, including Ehrlichiosis and Rocky Mountain Spotted Fever.

Dr. Ross Boyce is an Assistant Professor in the Division of Infectious Diseases at the University of North Carolina at Chapel Hill School of Medicine with a joint appointment in the Department of Epidemiology at the Gillings School of Global Public Health. He is a native of Clemmons, North Carolina, having graduated Magna Cum Laude from Davidson College with Honors in Chemistry. After graduation, Dr. Boyce was commissioned as an Infantry Officer in the United States Army, eventually rising to the rank of Captain. He completed two deployments to Iraq, where he served in a variety of leadership positions including Reconnaissance Platoon Leader, Operations Officer, and Civil-Military Officer. For his service, Dr. Boyce was awarded three Bronze Star Medals, including one with a Valor Device for heroism in combat.

Upon leaving the military, Dr. Boyce attended medical school at the University of North Carolina at Chapel Hill. Between his third and fourth years of medical school, Dr. Boyce completed a M.Sc. In Public Health from the London School of Hygiene & Tropical Medicine, focusing his thesis on the control of Dengue vectors. Dr. Boyce completed his medical residency at Massachusetts General Hospital, where together with partners at the Mbarara University of Science and Technology (MUST) and Epicentre Mbarara Research Base, he has worked to establish an active malaria research program in the highlands of western Uganda.

Dr. Boyce’s research focuses on the spatial and clinical epidemiology of malaria and other vector-borne diseases, particularly in rural, underserved communities. Current projects include (i) a NIH career development award (K23AI141764) that aims to develop more efficient methods of locating and targeting Anopheles mosquito breeding sites and (ii) a randomized controlled trial of insecticide-treated baby carriers, known as “lesus” in Uganda, funded by the Doris Duke Charitable Foundation. He has previously receiving funding from the Bill & Melinda Gates Foundation and Thrasher Research Fund, among others. The driving force behind this work is the goal of developing and operationalizing evidence-based interventions to improve care delivery in resource-limited settings.